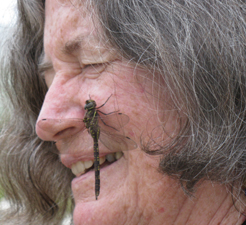 High summer and everything is intent upon breeding and increasing their numbers. Bugs everywhere! The "summer" flies are intent upon taking the food before it reaches my mouth.  The Mason wasps, mud daubers, are loudly building their nests, not only under chairs but also in the folds of the drapes, while spiders threaten to totally envelop the cottage with their webs.

In the evening, if I dare to leave the windows open, I am bombarded by moths and click beetles and bugged by Huhu beetles.  Raucous cicadas rudely awaken me in the morning while white butterfly caterpillars chomp their way through the cabbages.

But then there are the gorgeous and the exotic creatures which stop me in my tracks and dissipate any hostility towards the pestiferous.  They send me off to the books to try and make an identification.

Gorgeous steely blue lady birds which I can always find in the lime tree. A tiny native bee in the hay paddocks which I have yet to identify and a strange creature I always find on the Corokia shrubs. Green and yellow with a touch of white and with two "horns", at first glance it looks like a beetle but when disturbed it reveals itself to be a spider. I'm still working on finding out just who it is.

The wisteria vine is utterly infested with another strange creature which I have actually managed to identify as the larvae of an Australian green plant hopper. They bear a tuft of whitish hairs at the end of their bodies and jump a considerable distance when disturbed.

Why this desire, this compunction, a friend has asked, to name things, to identify them?

To show respect, is my response.

How many species are there in the world today? Most estimates fall between ten and 100 million. It is indeed remarkable that we in this modern world obsessed with measuring things, do not know to within an order of magnitude how many species we share the globe with, says Richard Leakey in his book The Sixth Extinction.

We have a good estimate of how many stars are in our galaxy.  We know how many nucleotide bases constitute the human genetic blueprint and we can calculate to within a few hours when a comet will collide with Jupiter yet we cannot put a secure number on current species diversity. It is not through lack of knowing but through a lack of commitment. Governments have spent hundreds of millions of dollars on the systematic study of stars but only a tiny fraction of that sum on the systematic study of nature here on Earth.

Of the estimates of ten to 100 million species that may exist on this planet only about 1.4 million have been recorded and identified. Even here in New Zealand the vast majority of species are unnamed and unknown. However, if we did make the commitment to “aim at nothing less than a full count, a complete catalogue of life on earth”, as Edward O Wilson urges, we would fail, as species are becoming extinct at an alarming rate. It is estimated that half the species will become extinct by the middle this century.

However, there have been at least five occasions in the very long history of the planet when nearly two thirds of its living creatures disappeared from the face of the earth. The end-Permian extinction, 225 million years ago, extirpated more than 95 per cent of marine animal species and almost as many on land. Virtually all scientists who are studying  biological diversity agree that we are now in the midst of the sixth great crisis, this time precipitated entirely by man, Homo sapiens.

The sad fact of our history is that no matter where we have gone, destruction and extinction of species has followed. This is not just a matter of our recent history. When primitive man crossed the Bering Straits into North America, destruction of all the great herbivores in both North and South America followed.  The movement of the human species into the Pacific Islands, Australia and New Zealand was also followed by mass extinction of species, in our case the great flightless birds among others.  European expansion in the seventeenth, eighteenth and nineteenth centuries merely accelerated the process.

With the continuing destruction of habitat in the face of industrial and agricultural expansion, both of which are aspects of continued population growth, the process of species extinction in the twentieth century has accelerated even more, to the point where our own future may well be threatened.

We have a moral duty to know as much as can be known about,  "the endless forms most beautiful", as Darwin has said, with which we share this earth.  It has become my credo, for once identified, once known and named, one cannot easily deny a creature's existence, cannot so easily destroy them.

Popular posts from this blog

The Precipitous Decline of the Birds of the New Zealand Countryside

January 23, 2019
With all the hullabaloo about the impact of intensive farming on waterways, the impact on birds bas been overlooked.
Millions of birds have been lost from New Zealand countryside over the past thirty odd years. Most of them were introduced birds so have not been missed but surely someone should have recognised that their loss indicated something had gone very wrong with farmland ecosystems.
We have a survey on New Zealand’s backyard birds, initiated by Landcare Research, but no up to date information on the birds of the countryside.
The only comprehensive data we have is from the Ornithological Society of New Zealand’s Atlas of Bird Distribution in New Zealand 1999-2004which was published 2007. It was noted at its launch that the Waikato region had become  a "bird desert" probably because of the dominance of dairy farming in the region. Birds have not, it seems, fared quite so badly on the less intensive meat and wool farms, but very little, if any, follow up research was in…
Post a Comment
Read more

March 06, 2019
There is this bird, beautifully patterned, black and white, and brown, a small bird, smaller than a thrush or blackbird that breeds on the Arctic tundra and then  flies here to New Zealand every spring. and here am I, just turning over stones.

A Murder of Rooks

November 12, 2018
From Southland to Northland, Regional Councils around the country are once again putting out the call for sightings of rooks, Corvis frugilegus, in their efforts to exterminate them.
The rook is a minor agricultural pest, on a par with the yellowhammer, so how did this bird become a target for extermination rather than control? How did this bird become an unwanted organism under the Biosecurity Act?
The rook is a black, hoarse–voiced bird about the size of a magpie which was brought to New Zealand from Britain between 1862 and 1874 to help control agricultural pests. Unlike many other European birds introduced at the same time, rooks spread very slowly at first. Even as late as 1970, they were largely confined to parts of the Hawke’s Bay, Manawatu, southern Wairarapa and Canterbury.
In the 1971 rooks were declared an agricultural pest in the Hawke’s Bay, largely because of the damage done to emerging crops.  Something like 35,000 thousand were shot, probably about half the population. Co…
Post a Comment
Read more