I usually see eastern rosellas, Platycercus eximius, on the outskirts of town, in rapid flight so that one does not easily catch sight of their georgous yellow, blue, green, and red plumage.

The call of the eastern rosella, a sharp piercing three syllable whistle on an ascending scale, I find quite disconcerting. Somehow, that a parakeet should whistle seems incongruous to me. They also exhibit metallic and piping notes at rest and soft chattering or babbling while feeding.

The eastern rosella, according to the ornithologist WRB Oliver, was imported to New Zealand in 1910 when a small shipment that had been refused entry by the Customs Department was released off Otago Heads from the ship that brought them. Other populations became established around Auckland in the 1920s and Wellington in the 1960s and are now the most common and widespread parakeet throughout the North Island. These flocks are also assumed to have originated from escaped caged birds but until some research is done, some DNA analysis, we have no way of knowing whether or not these birds, or at least some of them, have not found their own way here from Australia. Birds do keeping across the Tasman, caught up by the prevailing westerly winds and if they get here under their own steam they are deemed to be native birds and therefore protected.
The most compelling question regarding the eastern rosella, especially in light of arguments regarding the status of introduced birds and whether or not they should be exterminated, is whether these birds are simply filling a niche which our endemic kakariki have vacated or whether they have accelerated the kakariki's decline. Virtually no research, either here or in Australia, has been done on the eastern rosella so we really know very little about them other than anecdotal observations from birders. It would appear that land clearance, and supply of preferred foods such as grass seeds and fruit have greatly benefited the spread of eastern rosella in New Zealand, whereas the kakariki is more comfortable in the bush.
Both kakariki and eastern rosella are cavity nesters but the eastern rosella somehow eludes the predations of Rattus rattus, the tree climbing rat. However, the eastern rosella nests earlier than our own native species which may have them in competition for nesting sites. Oliver and other early observers seem to think that the decline of kakariki coincided with irruptions of rats. The red-crowned kakariki is reported to feed its young on the ground for a time before they can fly which must make the young birds particularly vulnerable and a reason why they, as opposed to the yellow-crowned, have disappeared from the mainland. Both the eastern rosella and kakariki have similar diets.

Here in Greytown where there are many old commercial apple and pear orchards with fruit left to rot over the winter, eastern rosellas are found in large numbers and are not persecuted. It would be hard to argue they are a threat to any bird here. 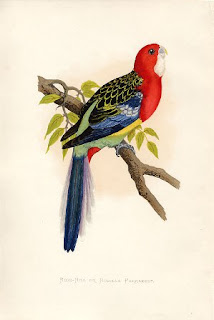 Popular posts from this blog

The Precipitous Decline of the Birds of the New Zealand Countryside

January 23, 2019
With all the hullabaloo about the impact of intensive farming on waterways, the impact on birds bas been overlooked.
Millions of birds have been lost from New Zealand countryside over the past thirty odd years. Most of them were introduced birds so have not been missed but surely someone should have recognised that their loss indicated something had gone very wrong with farmland ecosystems.
We have a survey on New Zealand’s backyard birds, initiated by Landcare Research, but no up to date information on the birds of the countryside.
The only comprehensive data we have is from the Ornithological Society of New Zealand’s Atlas of Bird Distribution in New Zealand 1999-2004which was published 2007. It was noted at its launch that the Waikato region had become  a "bird desert" probably because of the dominance of dairy farming in the region. Birds have not, it seems, fared quite so badly on the less intensive meat and wool farms, but very little, if any, follow up research was in…
Post a Comment
Read more

March 06, 2019
There is this bird, beautifully patterned, black and white, and brown, a small bird, smaller than a thrush or blackbird that breeds on the Arctic tundra and then  flies here to New Zealand every spring. and here am I, just turning over stones.

A Murder of Rooks

November 12, 2018
From Southland to Northland, Regional Councils around the country are once again putting out the call for sightings of rooks, Corvis frugilegus, in their efforts to exterminate them.
The rook is a minor agricultural pest, on a par with the yellowhammer, so how did this bird become a target for extermination rather than control? How did this bird become an unwanted organism under the Biosecurity Act?
The rook is a black, hoarse–voiced bird about the size of a magpie which was brought to New Zealand from Britain between 1862 and 1874 to help control agricultural pests. Unlike many other European birds introduced at the same time, rooks spread very slowly at first. Even as late as 1970, they were largely confined to parts of the Hawke’s Bay, Manawatu, southern Wairarapa and Canterbury.
In the 1971 rooks were declared an agricultural pest in the Hawke’s Bay, largely because of the damage done to emerging crops.  Something like 35,000 thousand were shot, probably about half the population. Co…
Post a Comment
Read more